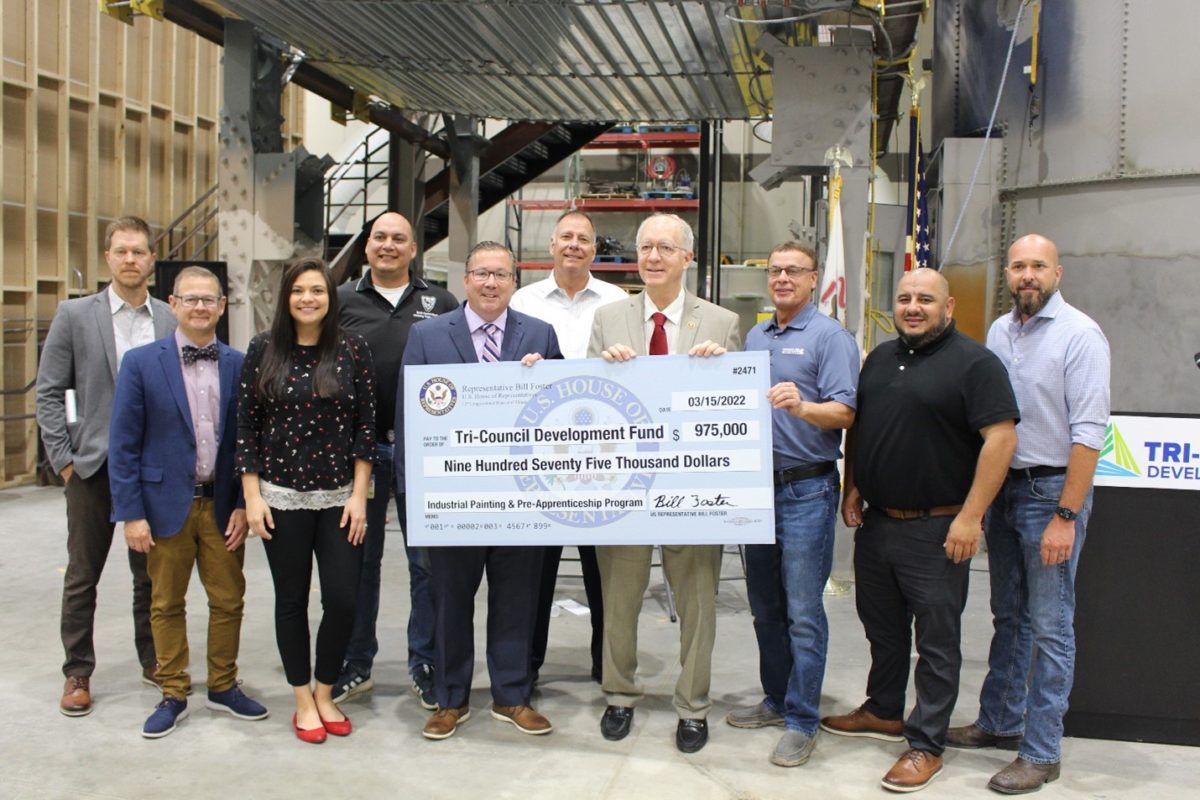 Made possible through a federal Community Project Funding award of $975,000 included in the Consolidated Appropriations Act signed into law by President Biden in March, the Industrial Painting Pre-apprenticeship will be a unique workforce development partnership that brings together the three apprenticeship programs in Illinois affiliated with the International Union of Painters and Allied Trades (IUPAT) to prepare the next generation of Illinois’ industrial painters.

Representatives from the TCDF’s partnering IUPAT district councils and their affiliated contractor associations gathered at the Aurora-based North Central Illinois Finishing Trades Institute on June 17 to announce the receipt of the award. U.S. Representative Bill Foster carried the funding proposal in Washington and was on hand to launch the program, which is being sponsored by the TCDF.

“This is a story about training the next generation of painters needed to care for our vital infrastructure,” said TCDF executive director, Todd Dotson, at the launch event. “We wouldn’t be able to tell that story were it not for Representative Foster’s willingness to learn about the training needs in the industrial painting sector and how workforce development in this area is an essential part of maintaining and improving our state’s infrastructure.”

Speakers at the event outlined the need for repair, replacement, and upgrades to public infrastructure systems of all types, and how demand for industrial painting work and workers is expected to grow rapidly. In Illinois alone, Dotson reported in his remarks, the American Society of Civil Engineers recently found that more than $27 billion was needed for maintenance, repair, and upgrades to public drinking water and wastewater systems and that more than 2,400 bridges across the state were structurally deficient.

Representative Foster emphasized the critical role of training to keep up with technological advancements and create career opportunities. “The future of work will look much different from what we remember growing up,” noted Foster.  “We need to invest in training and apprenticeship programs that enhance and expand people’s marketable skills, opening doors to the types of jobs that can support families and allow people to build secure lives. The TCDF is a critical component of just that. In partnership with the Illinois union finishing trades industries, they’re helping to strengthen our middle class while expanding opportunities to enter trade careers.”

Stephen Lefaver, Director of the North Central Illinois Finishing Trades Institute, one of three union apprenticeship programs that train industrial painters in Illinois, described industrial painting as “the most challenging painting work performed in the finishing industry,” adding that it is “highly specialized work that should be performed only by trained protective coatings specialists.” This includes, according to Lefaver, training in scaffolding and rigging, the science of corrosion, the use of high-powered blasting equipment, the application of specialized coatings, and health and safety protocols to keep themselves, their coworkers, and the public safe when the work is being performed.

The industrial painting sector is a complex segment of the finishing trades that focuses on applying industrial coatings to steel and concrete surfaces, such as those found in bridges, water towers, treatment plants, and many other types of vital community infrastructure. The funding will enable the TCDF, in partnership with the IUPAT training centers, located in Chicago, Aurora, and Collinsville, Illinois to provide career readiness training free of charge for as many as 100 students.

The program partners are also committed to working with community organizations to identify minority and female job seekers and members of other historically underserved or underrepresented populations who might wish to consider the industrial painting trades as a career.

“In designing the program, we plan to devote a significant amount of the funding to student support, providing the resources to address significant financial barriers that often exist for those seeking to enter into the building trades workforce, helping them thrive during the early days as an apprentice and get on a path to long-term employment,” says Dotson. Support for costs associated with transportation and childcare and stipends for time spent in the program are examples of the type of support Dotson says are needed while participants learn whether industrial painting is a career they can thrive in.

Dotson is excited to launch the program: “The IPP will help build workforce bench strength in the industrial sector to ensure that these critical community projects get done right and on time and budget.  This program is a win-win-win for workers, contractors, and communities.”